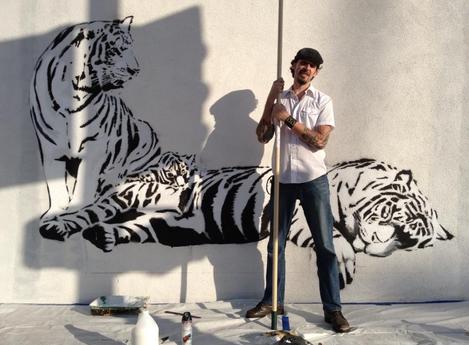 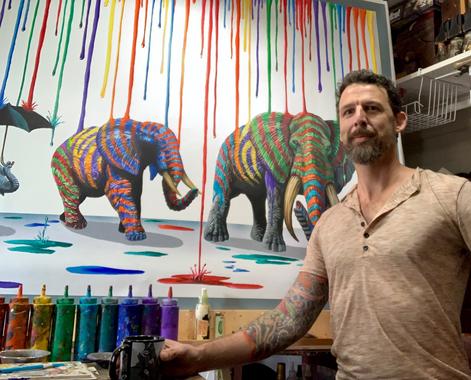 Michael Summers was born in Los Angeles sometime during the Carter administration. He grew up in Joshua Tree, California surrounded by a cavalcade of eccentric art-commune inhabiting social dropouts, idealistic dreamers, and rural American free thinkers. Art and creativity surrounded Michael from an early age and has been a pivotal part of his identity throughout his life. He left home in his early twenties and after drifting from Virginia, to Missouri, then Texas, he returned to San Diego, California, finally settling in Oceanside, where he currently lives and works.

A classically trained artist, Michael Summers blends the meticulous techniques of the old-world masters with contemporary, hyper-saturated imagery to create deceptively whimsical paintings, alive with hidden meaning. His paintings take us into a crisp and colorful world, full of nostalgia, splendor, and whimsy. Within each vibrant scene are playful reminders that our everyday lives are filled with wonder, beauty, and magic, if only we allow our eyes to see it.

Michael’s painting style is rooted in contemporary west coast surrealism with a strong pop sensibility; he uses the pop surrealist style as a tool to reflect his inner vision: creating the impossible and more importantly, making the impossible seem plausible. He creates imaginary characters - often alluding to mythical archetypes - in acrylic paint with a keen hyper-attentiveness. His unorthodox use of intense saturation and arbitrary, multi-chromatic hues encourages the viewer to look a little closer, a little longer. The recognizable subjects of animals, automatons, and humans suddenly become magical and extraordinary. Yet, they somehow still retain the nostalgia of a childhood memory that was once long forgotten.

Michael Summers has been sharing his art through murals and gallery exhibitions since 2008. During that time, he has had the privilege to be chosen as the featured artist for the San Diego Food & Wine Festival, Mission Federal ArtWalk San Diego, and the La Jolla Festival of the Arts. He was commissioned by the City of Carlsbad and Harrah's Resorts SoCal to create large-scale murals that are seen by thousands daily, as well as being chosen as a featured mural artist at prominent art and music festivals such as Lightning in a Bottle and Life is Beautiful Las Vegas. Represented in galleries from coast to coast, the rising exposure of Michael Summers’ work has made him highly sought after by collectors all over the world.